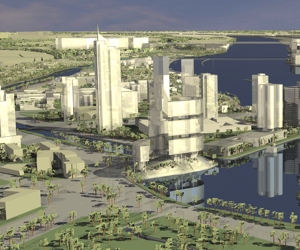 During the Riga city festivities a large model of the city depicting 64 square kilometres of Riga will be available for viewing in the Riga Kongresu Nams Lobby.

The model comprises the historical city centre, the Daugava and Pārdaugava territories, the north-eastern part of the city in the Ķīšezers direction, including Sarkandaugava, Čiekurkalns, Lielie and Meža cemeteries. The city is depicted with the currently existing buildings, its network of streets, parks and water features. The model is made in the scale of 1: 1000.

“I invite residents of Riga to use this opportunity and to drop into Kongresu Nams to look at their city from another perspective. In our everyday life, we pay more attention to details, whereas this model permits seeing Riga as a whole, evaluating its unique location and the city planning accents,” says Chairman of the Riga City Council City Development Committee Sergejs Dolgopolovs. “Studying the model might be also interesting to those, who plan to implement any development projects in the near future, in order to evaluate how these projects fit into the specific city environment.”

As for now, the entire model, which was made at the request of the City Development Department in 2007, is not available for viewing. Only a central part of the model and the Skanstes iela area will be displayed in Kongresu Nams.

Riga City Architect Jānis Dripe indicates that in future the entire model will be exhibited in the underground premise under the Red Riflemen Square and Rātslaukums, as soon as they are completely reconstructed and an underground car park is built under the Red Riflemen Square. “This is anticipated in the new detailed planning and is related to reconstruction of the Museum of Occupation. Such access to the complex will ensure a good connection between Red Riflemen Square and Rātslaukums, a new access to the Rīgas Mākslas Telpa Exhibition Hall and an ideal place for the Riga model,” says J. Dripe.

The large city model will be available for viewing at Riga Kongresu Nams until mid September.