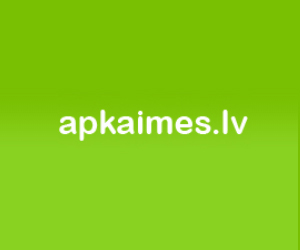 The Riga City Council City Development Department has created an interactive portal www.apkaimes.lv, where extensive information is summarised about Riga in territorial cross-sections. The portal contains the historical description and geographical status of every residential district of Riga, such as Vecmīlgrāvis, Pļavnieki, Teika, Āgenskalns and other districts, as well as statistical indices – the number of residents, the population density, the number of employed persons, public transportation and other information.

The development of the www.apkaimes.lv portal is a part of the localities project implemented by the City Development Department. The project idea has been promoted primarily due to the attempts to improve the link between the city development planning and the quality of life of residents. By now, comprehensive data on each of the city localities have been summarised – Bolderāja, Bieriņi, Mežaparks, Purvciems – a total of around 58 localities.

The Riga City Council City Development Department clarifies the concept of a locality as a populated area of an appropriate size that has its own maintenance, identity and nature resulting from the type of housing, physical boundaries, landscape and the community feeling of its residents.

Chairman of the Riga City Council City Development Committee Sergejs Dolgopolovs: “It must be acknowledged that there are still localities in Riga in the 21st century that have no centralised sewage and that are inadequately serviced by public transportation. Such a situation may not go on for much longer. The localities project is directed toward acknowledging and solving these problems; with the help of this project, we hope to facilitate the exchange of information between the municipality and residents and between specialists and the executive power.”

Within the framework of the project, it is anticipated to arrange public discussion on the possibilities of developing the Riga localities or residential districts and promoting the feeling of belonging to the specific city territory, on facilitating the participation and involvement of residents in the city planning processes on the locality level, as well as on the role of the municipality and non-governmental organisations in the process of strengthening the localities. It is to be added that localities are not meant to act as administrative units. Summarised information about localities will serve as a precondition for elaborating the Riga city investment policy that conforms to the balanced development interests.

Acting Director of the Riga City Council City Development Department Gvido Princis: “We would like to involve residents of the localities in the cooperation directed toward solving city development issues, including the active participation of residents in outstanding public discussions. The City Development Department is open for cooperation and we hope that, with time, all structural units of the Riga City Council, as well as non-governmental organisations, unions of residents and service clubs, will be actively placing their information in the portal.”

The information placed on www.apkaimes.lv is anticipated to be used for the needs of various target groups – residents, specialists in different industries, non-governmental organisations, students, politicians, etc. We hope that the summarised information on the specific features of each locality will also be used by land owners and project developers, who will implement their projects by considering the cultural, historical, social and geographical context of the place (the locality). With time, regular updating of statistical data and topical events is planned in the portal. A forum is arranged on the portal, where everyone can find like-minded persons in the form of discussions and in their locality of interest.

Deputy Director of the Board of Economics of the Riga City Council City Development Department and Localities Project Manager Guntars Ruskuls: “I invite every resident to get to know his locality, to be active and to participate in creating a city environment in his neighbourhood. We expect residents, specialists and other interested persons to post various additional information, photos and posters of events in the portal.”
The portal is currently operating in the test mode and all its visitors are invited to express their opinions and proposals, as well as to send information about activities taking place in the localities, to the e-mail address apkaimes@riga.lv.