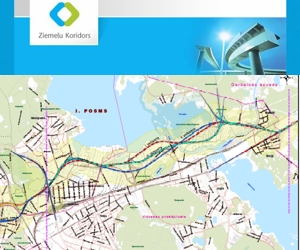 In October, representatives of the city of Riga will participate in the ISOCARP Porto 45th annual urban planning congress (Portugal).

Riga won the right to participate in the Congress after a selection competition, which was passed by the article “Facilitation of Sustainable Urban Structure through Adequate Transport System Planning Example of Riga North Transport Corridor” prepared by Riga City Council City Development Department specialists.

The subject selected for this paper correlates with the subject of this year’s Congress, “Cities with Low Carbon Emission”, substantiating a theme that has not yet been sufficiently accentuated, namely that the construction of new, large capacity roads in certain circumstances does not aggravate the general condition of the environment, but on the contrary improves it. The Riga North Transport Corridor project is used as an example in this article – one of the project goals is the improvement of the environmental situation in Riga, specifically in its central part.

The article prepared by the Project Management and Development Directorate specialists of the City Development Department is published in the www.isocarp.net ISOCARP database, thus promoting recognition of the city of Riga and the North Transport Corridor project among internationally acknowledged urban planning professionals. This is considered to be a significant achievement in the successful preparation of the project.

ISOCARP is a global association established in 1965 that unites experienced planners (>700) and planning organisations from more than 70 countries of the world. ISOCARP is a nongovernmental organisation acknowledged by UNO and the Council of Europe and also having an official consultant status in UNESCO. The chief goal of ISOCARP is to improve urban planning practice worldwide.