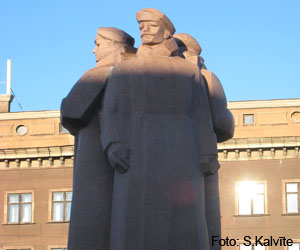 Residents are invited to actively express their opinions on the first draft of the detailed planning of the Latvian Riflemen Square territory during the public discussion period from 27 October to 25 November. A public meeting will take place at 18.00 on 16 November in the Assembly Hall of Riga City Council at Rātslaukums 1.

In addition, a professional team of architects and urban planners will lead a discussion on detailed planning solutions in Room 511 at Riga City Council at 10:00 on 20 November.

Written proposals on the first draft of the detailed planning of the Latvian Riflemen Square territory can be sent by mail or submitted at the Client Service Centre of the Riga City Construction Board at Amatu iela 4, Riga, LV-1050, or at all Riga City Council Visitor Centres. Opinions and proposals can also be submitted online at www.riga.lv in the E-Services, Public Discussions section.

To find a better solution for the Latvian Riflemen Square development, a special questionnaire form has also been prepared. For the convenience of residents, 11 questions have been included in the questionnaire along with replies on possible solutions from various specialists in the process of detailed planning elaboration. Questions relate to the development of various functions of the Square, improvement elements needed, open ground parking places and construction of a cafe on the Daugava embankment next to the pier, among others. All interested parties are invited to reply. The questionnaire form is available at all places where the proposal has been sent, and can also be completed online within five minutes at www.rdpad.lv.

The Detailed Planning 1st draft can be viewed at Riga City Council at Rātslaukums 1, 3rd Floor, Client Service Centre of the Riga City Construction Board at Amatu iela 4, the Latvian Riflemen Square and on the Internet at www.rdpad.lv in the Public Discussions section until 25.11.2009.

The aim of developing the planning is to include the territory between Rātslaukums and the 11th November Embankment into Old Riga’s spatial compositional and functional structure. The plan  is being developed with the view to solving the spatial conflict between housing structures developed in the Middle Ages and as a result of World War Two, by evaluating possible further development of the Latvian Riflemen Square and restoration of the city’s lost natural environment.

Riga City Council City Development Department has so far received 20 comments.  The opinions expressed by residents differ as to what should be done to revive the Latvian Riflemen Square and make it more attractive, both during holiday periods and on a daily basis. Questionnaires completed by residents contain an appeal to demolish the Museum of Occupation, along with many other differing proposals. Green plantations and flowerbeds are also mentioned as important elements of improvement measures..

The detailed planning is developed by SIA Nams.

Detailed planning elaboration of Kleisti at Rātsupītes iela will take place until 9 November. A complex low-rise residential construction is anticipated to be created on this territory. The detailed planning elaborator is SIA Stats Projekts. Written proposals can be sent by mail or submitted in person until 09.11.2009 to the Client Service Centre of the Riga City Construction Board at Amatu iela 4, 1st Floor, Riga, LV-1050, telephone +371-67105800.

In conformity with the Riga Territory Plan for 2006 – 2018 with amendments, the planned and allowed usage of the territory is “The Mixed Construction Territory with Residential Functions”, where the primary usage is construction of blocks of flats, commercial character facilities and sale and service facilities.

The Riga City Council City Development Department has not yet received proposals from residents on elaboration of this detailed planning.

Further information on public discussions is available on the City Development Department webpage www.rdpad.lv in the Public Discussions section and about the Riga Territory Planning for 2006 – 2018 with amendments – in the Riga Development Plan section.