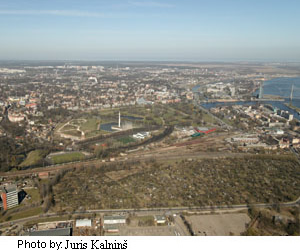 Potential applicants could submit their offers for the competition of sketches “The City Construction Vision of the New Centre of Riga in Tornakalns, the Riga City Council and the State Administrative Complex” up to the 3rd of September.

17 applicants have submitted their offers. All the received works are being currently evaluated by the Jury Commission, which shall announce the competition winners on 17 September. The winner will receive the prize of LVL 35,000.

“With the help of the New Riga Centre Project the Riga City Council would like to obtain not only a modern administrative complex but also to develop the Tornakalns territory in general, arranging new residential areas and the public area with a recreational zone accessible to all residents of Riga,” indicated Director of the City Development Department of the Riga City Council Peteris Strancis at the start of the competition.

The competition territory is to anticipate arrangement of the New Centre of Riga, which shall include: The Riga City Council Administrative Complex, where 2,300 employees are planned to be accommodated, a complex of administrative premises appropriate for State institutions (premises to be constructed for Latvian Television, Ministry of Finance, State Standard Supervision Inspectorate, Treasury, Ministry of Culture; as well as the planned opportunity for accommodating other Ministries and State institutions at the territory), public car parks, the transport hub, the new railway station Torņakalns, the retained railway tracks to the Railway History Museum, the perspective network of streets, additional utilization securing uniform utilisation of the competition territory during the entire day (for instance, a cafe, a hotel, a conference centre, etc.), the residential function for up to 30% of the total floor area of the territory anticipated for the competition, good and convenient connection for the pedestrians to the planned Riga Bus Station at Vienības gatve, bicycle sheds at the publicly significant institutions, the publicly accessible and well-furnished embankment of Mārupīte, the publicly accessible garden or a green area.

Historically the situation has established that the Riga City Council Departments and other structural units are located in different places of Riga. To increase the efficiency of the municipality operation and to reduce expenses, which directly (transport expenses, phone call expenses, etc.) and indirectly (time spent by employees for travelling, hampered communication between the employees, information flow between the departments, etc.) appear as a result of different locations of the departments, the decision is taken to unite the Riga City Council administration in one building. The new administrative facility of the Riga City Council is planned to be built beyond the Riga Centre, facilitating the infrastructure arrangement at the undeveloped territories.