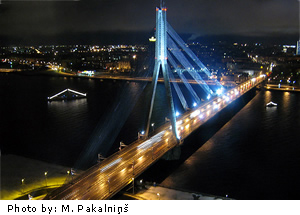 To obtain the data required for improving the transport system in Riga and its environs, on 11 – 22 September polling of drivers was performed in Riga on the Daugava bridges.

“We thank the car drivers for understanding and patience. Results of the poll will allow the traffic planners to better elaborate technical documentation of the Riga North Transport Corridor and to justify the financial requirements to the European Funds. The North Corridor is vitally important to Riga, as only upon construction of this route, will a fully-fledged and convenient detour be created and the city will be freed from transit transport,” indicates Deputy Chairman of the Riga City Council, Head of the Management Committee of the Riga North Transport Corridor Andris Ārgalis (TP).

Such polls have proved their efficiency and have been widely applied also in other cities of the world, in order to plan investments into the traffic infrastructure. In total, about 50 persons have been involved in the polling process, as well as the State Police staff.

Simultaneously with the polling, the questionnaire survey has been performed at the Technical Inspection Centres in Riga and Jurmala, as well as car counting at the Daugava crossings. Car counting will be continued on October 2, 4 and 6.

Whereas, the research trips along the city of Riga are planned to be started from 9 October. If polling on bridges was required to clarify habits of the Riga residents in choosing routes and daily transportation, then during the research trips it is anticipated to precisely fix the time required to get from one point to another.

The information obtained during the research is confidential and will be used only in the summarized way for the Riga transport model renovation and supplementing. The information update is required for the needs of elaboration and implementation of the traffic improvement projects. Currently, the obtained data are being processed and analyzed. They are planned to be used in the process of elaborating the technical project and the financing model of the Riga North Transport Corridor.