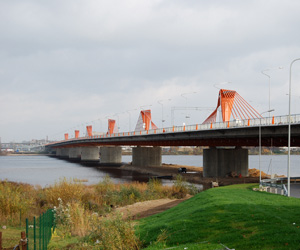 The South Bridge is the most wide-scale and complicated construction in Latvian history since the restoration of independence.

At the opening ceremony, the South Bridge was consecrated by representatives of the three largest religions in Latvia: the Archbishop of the Latvian Evangelical Lutheran Church Jānis Vanags, the Metropolitan Aleksandrs of Riga and all Latvia and the Cardinal of the Latvian Roman Catholic Church Jānis Pujāts.

“The South Crossing is the most wide-scale traffic infrastructure object implemented in the city of Riga in the last decades. The new bridge and the access roads are of vital importance for the traffic organization in Riga, as the city is developing and the constantly growing intensity of traffic requires a courageous solution. The bridge construction has been a complicated process, steeped in various rumours, however, I am certain that traffic will remain an ongoing chief priority of the municipality,” said Jānis Birks, Chairman of the Riga City Council.

“I am proud that just a day prior to the 90th anniversary of the Latvian state we can make a special gift to our city – the South Bridge – the fifth bridge in Riga over the Daugava. Large bridges are not built often in the world, and, thus, it is a great honour and challenge for the builders.  Only due to the intense work day after day, have we managed to complete the South Bridge and the flyovers over Krasta iela and Maskavas iela a month and a half prior to the anticipated commissioning term. We have gained invaluable experience for a start in other construction projects, including international ones,” emphasizes Guntis Rāvis, Chairman of the Board of Dienvidu Tilts AS.

In honour of the South Bridge opening and the 90th anniversary of the Latvian state, on November 17 and 18 after dark, the bridge had the festive illumination put on. The first stage of the South crossing – a bridge over the Daugava and the elevated roads over Krasta iela and Maskavas iela were opened for traffic by midnight of 17 November, whereas, for pedestrians, the bridge was opened earlier – from 18.00. On the Riga City Council webpage www.riga.lv, one can see the South Bridge traffic scheme, as it is after the bridge opening.

The 1st stage of the South crossing includes the bridge over the Daugava and the flyovers over Krasta iela and Maskavas iela. The bridge has three traffic lanes in each direction, a bicycle lane and a pedestrian pavement on each side. The South Bridge is 803 m long and 34.28 m wide. The speed limit on the bridge is 70 km/h. Construction of the 2nd and 3rd stages of the South Bridge will go under supervision of the Riga City Council Transport Department.

The task of the South Bridge is to secure communication between the south-western part of Pārdaugava and the right bank regions of Riga namely the Latgales and Vidzemes Urban Districts and the Northern Region – without crossing the city centre and, thus, reducing traffic jams. The bridge will also allow bypassing the city centre for the transit traffic to Jelgava, Bauska, Ogre, Sigulda, Saulkrasti, Vecmīlgrāvis and Carnikava. The new bridge will allow the traffic intensity to reduce on Krasta iela and 11 Novembra krastmala, as well as over the Island Bridge.