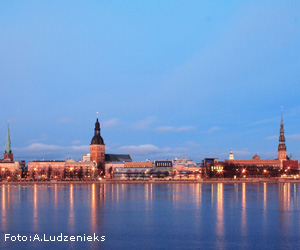 The largest approved and accepted construction projects in January are: improvement, water supply and sewerage of the Vakarbuļļi swimming venue, and improvement of the Ķīšezers embankment on Ezermalas iela; the multifunctional business complex Symbiotic Tower at Balasta dambis 1; the multi-storey residential building on Strautu iela 24a; the Augusta shopping centre on Dombrovska iela; the shopping centre at Mārupes iela 10a; the Maxima X shop on Ulbrokas iela; reconstruction of the multi-storey block of flats at Aleksandra Čaka iela 105, as well as other construction projects.

The new construction projects approved at the sketch stage are: the Rumbula residential district on Maskavas iela; the office building on Dārzciema iela; the multi-storey multifunctional house at Lubānas iela 37; the IKI shopping centre at Prūšu iela 2; the Supernetto SIA shopping centre at Prūšu iela 2b; reconstruction of the residential building and construction of a block of flats at Matīsa iela 133/135 and other projects.
In January the Riga City Construction Board received 111 confirmation cards to perform simplified renovation/ reconstruction works, which is 37% less than in January 2008.

In January 62 construction objects were commissioned in Riga, which is 39% less than last January. The largest amount of commissioned objects was in the Latgale Urban District – 12 and the Northern Region –10, in the Vidzeme and Zemgale Urban Districts – 7, and in the Kurzeme and Central Regions – 6 construction objects and engineering networks – 14.

According to the currently available information on non-observation of the construction regulations, i.e. starting the unauthorized construction and deviations from the approved projects, 10 administrative protocols were drawn in January. The Administrative Commission has imposed fines in the amount of LVL 50 – 1 000. The total amount of claimed fines for the committed violations is LVL 3 350.

The largest fine in the amount of LVL 1 000 has been imposed on NORDIC Tekstils SIA for transformation of the production warehouse into the warehouse-office building.