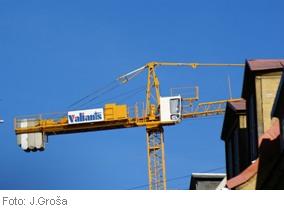 In March and April 140 construction facilities were commissioned in the City of Riga. The largest amount of the commissioned facilities were in the Vidzeme Urban District -37, in the Northern Region – 28, in the Latgale Urban District – 22, in the Kurzeme Region -19, in the Central Region -18, and in the Zemgale Urban District – 16 construction facilities. Such facilities are taken into operation as the newly built 1st stage of the Bank facility at 7 Vesetas iela, the 1st stage of the expanded-clay concrete production plant at 6 Daugavgrīvas šoseja, the warehouse building with commercial premises at 25 e Ganību dambis, the multi-storeyed blocks of flats at 12 k-2 Ulbrokas iela, 100 Jūrmalas gatve, 17 k-1 D.Brantkalna iela, the residential building with a household premise at 53 Čiekurkalna 2.līnijā, residential buildings on Traleru iela and Vižņu iela, and many other objects.

In March and April 403 confirmation cards were submitted to the Riga City Construction Board for performing simplified renovation/reconstruction work, of these 272 applications were received from private persons and 131 from legal entities.

According to the currently available information on non-observance of the construction regulations, i.e. starting unauthorized construction and deviations from the approved projects, in all 57 administrative protocols were drawn in March and April. The Administrative Commission imposed fines in the amount of LVL 50 – 4,500. The total amount of penalties for the made violations is LVL 43,800.