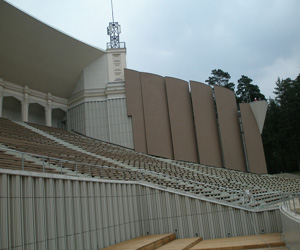 Reconstruction of the Mežaparks Large Open-Air Stage, which was started last spring, will be completed in the middle of June.

By now, within the framework of the reconstruction, the required stability of the constructions has been achieved, internal premises have been repaired, internal engineering communications have been replaced, new damp-proofing and heat insulation of the steps for singers has been built, the roof cover over the singers has been replaced by using the acoustic material – aqua panels, acoustic panels of the side walls have been installed, a new orchestra pit has been built.

Significant territory improvement works have been performed as well – a new fencing of the open-air stage territory with new gates have been built, a car park for technological, special and VIP transport has been built, as well as the bus parking place, and the driveways to these have been improved, lighting has been arranged for the car parks and roads, new removable benches for the spectators have been manufactured, facades of all the buildings remaining on the open-air stage territory have been improved, partially roofs have been replaced, the Green Theatre has been repaired.

Besides, within the framework of the reconstruction, a new boiler room has been built, which will run on liquefied gas, a new heating main has been built, as well as a new fire water main, the water and sewage systems have been tested and problem areas replaced.

Acting Director of the Riga City Council City Development Department Gvido Princis: “By now over 4/5 of all the planned works have been completed. By the middle of June, the spectator part foundation square is still to be built, the territory improvement is to be finished and the Large Alley lighting network is to be reconstructed. All works shall be completed within the anticipated terms.”