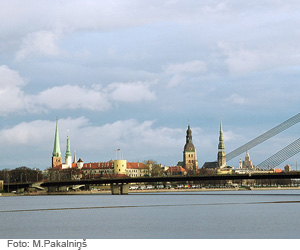 On 28 September this year the Riga City Council City Development Department has announced a competition on suggestions for improvement and development of the Latviešu Strēlnieku Laukums.  Applicants can submit their suggestions until 26 November at 11.00.

The Riga City Council City Development Department invites Latvian and foreign architects to provide their contribution and to actively participate in improving the central part of Old Riga.

The aim of the competition is to receive sketches offering the town-planning solution for the territory between the Rātslaukums and the 11 Novembra Krastmala. Chief requirements of the competition determine that the new construction can be anticipated between the Latviešu Strēlnieku Laukums and the Rātslaukums, in order to consolidate and improve the planning and spatial structure of the Squares.   Overground storeys of the construction are to be used for cultural functions and functional diversification of the square; for its auxiliary usage, arrangement of small cafes, shops, etc. is to be anticipated at the cultural objects.

Whereas, the constructions adjacent to the Latviešu Strēlnieku Laukums – building of the Latvian Occupation Museum and the main building of the Riga Technical University, are anticipated to be retained; also, extension of the Latvian Occupation Museum is planned over the current cellar premises of the museum to the Grēcinieku iela in conformity with the design elaborated by Gunārs Birkerts. The competition participants are to perform analysis of the current and forecasted traffic flow and to elaborate the perspective traffic development scheme. Organization of the public transport flow is planned, to secure good access and maintenance of the territory. The current public transport stops degrading the environment are to be removed to another place in the vicinity of the square, construction of the underground car park is to be anticipated under the square, pedestrian movement in connection with the Daugava bank is to be solved, as well as other spatial development, cultural and historical heritage retention, transport and public external space development issues.

The chief criteria, according to which the sketches submitted for the competition shall be evaluated, is the architectonic solution and the innovative aspect of the construction project spatial solution between the buildings of the Riga Technical University and the Latvian Occupation Museum, integration into the specific city environment and its correspondence to the Old Riga construction context, as well as the conception of the transport traffic, flow of pedestrians and cyclists, alongside with the territory improvement and greening.

Rules of the competition can be studied and obtained at the Room 414, 4 Amatu iela, Riga, phone for the information 67012879.

The Latviešu Strēlnieku Laukums and the constructions forming it is in the focus of the Old Riga planning. This is the place, which is in direct contact with the heart of the city –Riga Rātslaukums.

In the 20th century the radical reorganization works have been started recurrently at the competition territory, each time minimally respecting the previous projects.  As a result, the Latviešu Strēlnieku Laukums is formed of the 19th century construction, the Riga Technical University building of the so-called Stalin’s epoch and the Latvian Occupation Museum building influenced by international modernism.

The sketch (ideas) competition “Memorial Commemorating Victims of the Soviet Occupation” announced by the Ministry of Culture of the Republic of Latvia on 14.06.2007, this sketch competition and the following detailed planning is a new challenge for including the competition territory into the Old Riga spatially compositional and functional structure, in order to achieve its final form: solving the spatial conflict between the construction structures of the Middle Ages and the ones formed as a result of the Second World War; consolidating the cultural, tourism and youth attraction functions in the Old Riga; anticipating observation of public interests in securing the public external space and its quality.