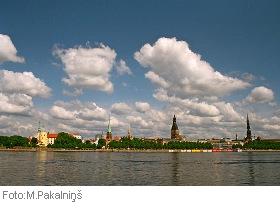 During the period of July to August this year the City Development Department at the task of the Riga City Council, in cooperation with the Market and Public Opinion Research Centre SKDS, has performed the research by asking the Riga residents about their satisfaction with the local government operation.

The aim of questioning the Riga residents is to obtain data for evaluating implementation of the Riga City Long-term Development Strategy for the Period up to 2025, which is one of the most significant Riga development planning documents.

“The performed polling on the satisfaction of the Riga residents with the local government is a very important event, as, firstly, feedback from the Riga residents is provided and, secondly, achievements in introducing the Riga development long-term strategy are monitored. The monitoring results will be summarized in the strategy supervision survey, which shall be publicly available for all the residents. Apart from polling satisfaction of the residents, which will provide qualitative indices for the monitoring, various social economic statistical data will be used in the survey, as well as the operating indices of the Riga City Council institutions and departments. Further on, such research will be performed at least once a year,” says the Deputy Director of the Board of Economics of the Riga City Council City Development Department Guntars Ruskuls.

2001 respondents have been questioned – the Riga city permanent residents aged 15 and up – in the form of direct interviews at respondent’s places of residence.

The Riga residents have not only positively evaluated or criticized the work of the local government but also have provided constructive suggestions for solving the problems of their city. Having replied to the question on the problems Riga has to solve primarily, 43% of the respondents indicated to the fields related to traffic improvement – to reduce traffic jams, to improve the situation in the streets and the general infrastructure by making repairs, improving public transport, its routes and frequency. 24% of the respondents gave replies related to the expensiveness of life. Problems related to the city development were noted by 15% of the Riga residents – it is necessary to increase the quality of the built-up environment, to perform repairs of the internal yards, to repair houses, to liquidate slums and to arrange more pubic toilets. Also the environment problems worry 15% of the respondents – it would be required to put the city in order, to extend the green area and to improve waste utilization. It has been also indicated to the necessity of improving social care, to help the homeless, to support pensioners by increasing their pensions, to facilitate public order and safety.

Among “the good things” or achievements, the Riga residents mostly noted the improved traffic in Riga, the repaired streets, construction of the South Bridge, improvements in the public transport, both in its schedule and routes, and in the procurement of new trams, trolleybuses and buses. As a positive tendency, the residents acknowledged the going on construction in the city, the arranged children playgrounds, the renovated buildings and the improved quality of the built-up environment, as well as the related visual image of the city in general. Similarly, some residents acknowledged that Riga has become more orderly and cleaner and more attention is devoted to the arranging and upkeep of the parks and green areas. Also cultural events, various arrangements and concerts in the capital have been evaluated positively.

The Riga City Council City Development Department will use the data obtained during the polling, in order to evaluate the achieved results in implementing the Riga City Long-term Development Strategy for the Period up to 2025.

The aim of the Long-term Development Strategy is to serve as a framework for the Riga development planning documents and to create the prerequisites for the sustainable development of the City of Riga, as well as to improve the quality of life of the Riga residents. This strategy reflects problems to be solved by the City of Riga in general, showing how to do it in the best way. Much attention was devoted to introducing the strategy, so that it could be practically used as a manual for the City administration and daily activities of the active Riga residents. To achieve this, several indicators have been put forward for each long-term aim that correspond to or supplement the sustainable development indicators of the European cities. These generally describe the current situation in the appropriate field and put forward the measurable average term (7 years) achievements and the long-term (about 20 years) development trends, in order to be able to periodically evaluate the results of introducing the strategy – to be aware of discrepancies and errors, the unfinished work, as well as to feel satisfaction for the performed.

Questioning the Riga residents (in Latvian).