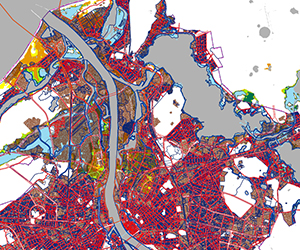 Today the City Development Committee of the Riga City Council has considered the map of territories at risk of flood from the Daugava River, which is developed by the Latvian Environment, Geology and Meteorology Agency.

On this map, 80 square kilometres of the Capital City territory are considered to be flood land. It means that, in accordance with the interpretation of Section 4 Paragraph one Clause 37 of the Shelterbelt Law included into the Satversme Court judgment, a third part of the Riga territory is prohibited for construction of buildings and structures. Simultaneously, it is prohibited to build the specially anticipated protective structures or to make mounds for the construction of buildings and structures, even for short-term usage.

The City Development Department sees several problems in solving the flood land issue. Firstly, due to the Satversme Court judgment, several significant construction projects are threatened at the Riga Port territory, Lucavsala, Kipsala, etc., inclusive the Riga Northern Transport Corridor arrangement and the Acoustic Concert Hall construction. The Northern Corridor is one of the most important and the highest priority city infrastructure objects. Secondly, the flood land map does not coincide with the risk map included into the Riga territory planning for 2006-2018. It means that the Construction Department of the City of Riga will not be able to issue construction permits, even though the territory is planned to be allowed for construction. It is to be noted that the risk map has been approved by all responsible institutions and during the planning elaboration no objections have been received.

“Urgent changes in legislation are required in order to arrange the flood land issue and to separate the environmental shelterbelts and the technical shelterbelts, as well as the City and the country flood land,” says Director of the City Development Department of the Riga City Council Peteris Strancis.

“If we are afraid of the water, it will not solve the flood land issue, it will be flooded this way or other. Similarly, we have to be afraid of trees, as during a storm they can break, and it means that construction is to be prohibited also in the vicinity of any tree,” adds P.Strancis.

There are about 3,600 land plots, which belong to the State or to the municipality or to private persons, on the flood territory. As construction at many land plots will not be possible any more, the City Development Department will solve the issue on informing their owners.