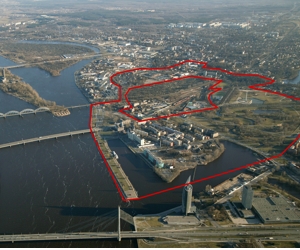 This week the winner of the sketch competition Jonathan Kendall, Director of the British architect firm: “Fletcher Priest Architects” has met with the Riga City Council City Development Department management and the Riga City Architect Jānis Dripis, in order to specify priorities of the project and a further course of action.

During the meeting, the Director of the City Development Department Pēteris Strancis gave information about the priorities of the project, emphasizing the elaborate development of infrastructure in solving traffic problems and creating the Administrative Complex of Riga City Council institutions.    The location of the Bus Station and the Railway Station development was defined. Also further stages of the Torņakalns development project were clarified.

The traffic problem in the city is especially topical at present and its improvement is one of the priorities of Riga City Council. The Torņakalns development project is planned to include arrangement of the Riga City Administrative Complex, where different local government and state institutions could be united together territorially, to improve the current traffic load and communication between the institutions. Simultaneously, the new Torņakalns region is anticipated to be provided with well facilitated, publicly accessible territories, parks, bicycle paths, conference halls, residential areas, a well facilitated embankment of the Mārupīte, another Bus Station on the left bank of the Daugava and the development of Torņakalns Railway Station.

The architect firm “Fletcher Priest Architects” has experience in developing similar projects in Great Britain, however, Jonathan Kendall emphasises that in implementing the Torņakalns development project he would like to tightly cooperate with  the City Development Department and its invited project specialists, as well as with the winners of the second and third places at the competition – the Latvian architect firms Uģa Šēnberga Arhitektu Birojs and MG Arhitekti, in order to implement the wide-scale project as well as possible.

The British architect firm is cooperating with several companies, which have branch offices also in Latvia, such as Sony, Nokia, Vodafone, and it has been suggested to also attract these companies as possible cooperation partners.

The development project elaborated by the British architect firm “Fletcher Priest Architects” is planned to be incorporated into the detailed planning of the Torņakalns Administrative Centre territory.