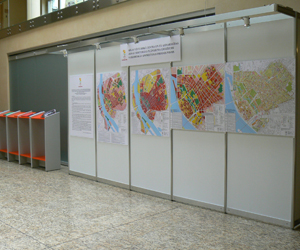 On Wednesday, 3 September the meeting on the first stage of the public discussion of amendments to the graphic part of the “Regulations on Usage and Construction of the Riga Historical Centre and its Protection Zone Territory” took place at the Riga City Council Assembly Hall.

The meeting was attended by 16 residents and representatives of different companies.

In the process of the meeting, representatives of the Joint Venture Grostona expressed their opinion and submitted proposals on change of the zoning, correction of the streets red lines and building of the planned streets in the area of the Grostonas iela, J. Dāliņa iela and Dikmaņa iela.

By 10 September, the interested parties could have studied the planning of the Riga Historical Centre and its Protection Zone Territory and amendments introduced to it, the Riga Territory Planning for 2006 – 2018, the Riga Development Programme for 2006-2012 in the Riga City Council Entrance Hall on the 1st Floor at 1 Rātslaukums on workdays from 9.00 to 17.00. Offers for elaborating amendments can be put into the corresponding box located next to the stands with the planning materials. During the public discussion period the information is also available on the Riga City Council City Development Department webpage www.rdpad.lv, in the Public Discussions section, and https://www.rdpad.lv/rvc.

Upon completion of the first stage of the public discussion, the Riga Historical Centre and its Protection Zone Territory planned (allowed) usage will be elaborated, as well as the basic conditions of building up, the detailed planned (allowed) usage of the territory and the Historical Heritage Retention and Development Plan with amendments in the first wording, which the interested parties can study and, if required, provide offers during the second stage of the public discussion.