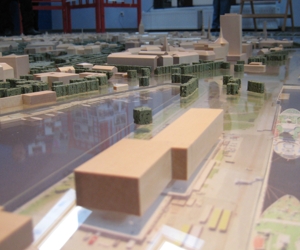 On 17 January, at 12:00, at the St. Peter’s Church, the Riga City central part’s model was presented publicly, where it was available for viewing until 18 January. Further on, the model is anticipated to be exhibited in the Rātsnams’ premises.

The model depicts the central part of the city of Riga with water bodies, green areas, streets and the available buildings at the territory of 60 square kilometers, which includes the historical center of Riga, the Daugava and the central part of the Pārdaugava area of the city, the territory in the north-eastern direction up to the lake Ķīšezers, containing a part of Sarkandaugava, Lielos and Meža cemeteries and Čiekurkalns.

The Riga City central part’s model is intended to be used in the activities of the Riga City Council City Development Department, when planning the city’s development and evaluating the construction projects submitted by developers, as well as this it will promote  society involvement in forming the general spatial vision of the city.

The model is created in such a way, as to provide an opportunity of viewing the Riga City territory and also its further development by placing new objects there, as well as to secure the visually spatial depiction of the city environment for its presentation needs.

The Riga City central part’s model has been made at the order of the City Development Department. The city model in the scale of 1:1000 was made by SIA O.R. Points, and LVL 69,492 have been spent for its implementation.

To make the model, modern materials and technology have been used, so that its properties are not impacted by the surrounding environment. Foundation of the model is made of Plexiglas plate, the trees and buildings are made of transparent lacquered wooden material.