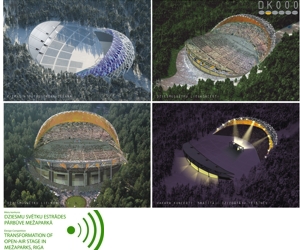 It was announced on 5 November by the Jury Commission, which by 17 October had received 16 offers.

The second best offer was considered to be the one by the French Company Dorell Ghotmeh Tane/ Architects and the third place was given to the Latvian Architects Bureau SIA India.

The Riga City Architect Jānis Dripe is satisfied with the response from his colleagues, as the majority of the submitted works have been created by Latvian architects. “The competition is to be rated as a successful start for the Open-Air Stage reconstruction process, so that correspondingly already at the 2008 Song Festival we could have considerable improvements and at the 2010 Youth Song Festival or at the 2012 General Song Festival we could obtain an ideally sounding, beautiful and functional open-air stage. Such construction of the open-air stage is to become an internationally significant event, as the Song Festival tradition is unique in itself. Preconditions for things to move ahead correctly and successively have been created!”

When analyzing the offer of the Architects Bureau SIA Arhitekta J. Pogas Birojs, the Jury Commission wrote in its resolution: “Strong environmental image of the beautiful cultural tradition and the architectonic symbol for the Song Festival Open-Air Stage. Architectonically, the image of the Song Festival Open-Air Stage is very promising, thus creating a fascinating and intensive holiday atmosphere, it offers individual features and qualities.” The winner of the competition architect Juris Poga acknowledges that his work was full of controversies; still they have been successfully solved due to historical significance of the place. The offer of the Architects Bureau SIA Arhitekta J. Pogas Birojs for the open-air stage anticipates the changeable part mounted for the needs of every performance – acoustic shields, screens, lighting, decorations, coulisses and audio equipment. Change of layout of the acoustic shields will secure the appropriate acoustics for different nature performances. At the sides of the singers’ tribunes both the choirs and visitors can be arranged, and the ascents will secure fast replacement of choirs..

The work of the second place winner, Dorell Ghotmeh Tane/ Architects (France), according to the Jury Commission evaluation, is “real, rational and an economic solution retaining the traditional values; the project has been elaborated in conformity with the landscape environment and the Song Festival traditions.”

In its turn, the project of the third place winner – SIA India (Latvia), according to the Jury, is “beautiful and modern architecture, a thoroughly elaborated architectonic concept and interesting spatial solution.”