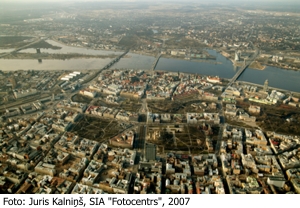 Riga Historical Centre, which also includes development of Old Riga, was included on the UNESCO World Heritage list in 1997.

In the decision of the World Heritage Committee it was stated, that “Riga Historical Centre with its relatively untouched urban structures of the middle and later ages, the satiety and quality of the Jugendstil architecture and 19th century wood architecture, has a unique value, with no equivalent elsewhere in the world”.

Riga Historical Centre square area is 435 hectares or 1,4% of the city territory and it contains about 4 000 buildings.

Riga Council City Development Department director Peteris Strancis says in his report about the time passed: “In that time Riga Historical Centre Preservation and Development Committee was established, which is regarded in the world as an excellent example of city and state cooperation in the World Heritage preservation. We approved a plan for Riga Historical Centre preservation and development, as well as the building of three culture objects of State importance which was timely agreed with UNESCO World Heritage Centre”.