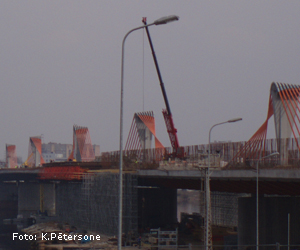 With opening the bridge, the first stage of the entire Daugava crossing project will be completed, the construction of which was started in 2004. After opening, traffic on the bridge will be on three driving lanes in each direction, as well as separate roads for pedestrians will be available together with one bike path in both directions. The new bridge is estimated to unload traffic on the Island Bridge by about one fifth.
Acting Director of the City Development Department of the Riga City Council Gvido Princis: “All construction and planning works are currently going as scheduled, and we shall provide the bridge to be used by the residents within the promised terms.”
The first stage, which includes designing and construction of the bridge, as well as the elevated road over the Krasta and Maskavas iela, of the entire Daugava crossing project, which is the largest construction object in the Baltics in the recent 25 years, will cost LVL 85.5 million. Costs of the South Bridge, which is 803 m long, are LVL 35.4 million, and cost of one square meter of the bridge is LVL 1,184. The financial credit for implementing the first stage of the project is taken for 20 years, with the fixed interest rate of 6.43%. In 2004 the State Construction Inspectorate of the Ministry of Economics checked the submitted estimation of the project. In accordance with the check results, estimation of the construction expenses approximately corresponds to the situation at the construction market of 2003.
Summary of the construction cost estimate of the first stage is available at the Riga City Council City Development Department (PAD) webpage on the internet www.rdpad.lv. Anyone interested can see the detailed cost estimate on 50 pages with approximately 3,000 items and sub-items by applying to the PAD Customer Service Centre by phones 67105800, 67012889.
The Daugava South crossing project is divided into 3 construction stages. In the 1st stage, which construction is supervised by the Riga City Council City Development Department, the bridge and its descents will be built, in the 2nd and 3rd stages supervised by the Riga City Council Transport Department, access roads to the bridge will be built, their total length reaching 8 km.

Temporary connection of the South Bridge to Bauskas iela   (.pdf)