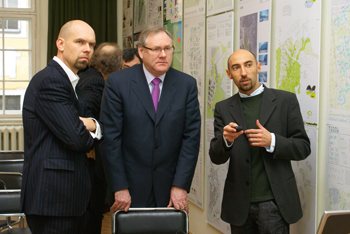 The Riga City Council City Development Department and the Latvian Union of Architects wish to inform that the Ninth International Europan Competition of the city planning and architectural ideas of young European architects, where the 27 hectare territory in Jugla was provided for architectural ideas, has been completed.

During the competition, 14 development offers of local and foreign architects have been received and evaluated.

Having evaluated the submitted visions of the territory development, the Competition Jury has nominated the Architects Bureau Paolo Iotti and Marco Pavarani from Italy as the winner of the Europan 9 Latvian Competition. The second award has been granted to the joint work of the Spanish architects Miguel Rosique and Esther Escribano. Today the winners were presented Diplomas and Prizes from the Riga City Council and the Latvian Union of Architects.

Commenting on results of the Europan 9 Competition, Director of the Riga City Council City Development Department Pēteris Strancis has emphasized that Riga is participating in this most prestigious competition of young European architects for the third time, and this time, similarly to other European states, the competition customer, apart from the local government, is also a private company. This, according to P. Strancis, considerably increases the opportunity of the winner’s entry to be implemented into life.

The Europan 9 Competition was announced last spring simultaneously in twenty-two European states, including Latvia. The city of Riga, in cooperation with the Latvian Union of Architects and the private investor SIA AGN, has provided for the Competition the 27 hectare territory at Jugla Lake, between the Mazā Jugla, Jugla and Ūdeļu ielas, which is one of the largest multifunctional developed territories within the boundaries of Riga and for which the city is searching for the best development model.

The aim of the Competition was to create a high value living space, where a high quality living environment, service and infrastructure facilities and the developed nature recreational potential are united, the proximity of Jugla Lake to the forest allows it to be considered as an excellent value place to develop as somewhere to live.

Ideas Of The Winners:

The entry of the winner of the Europan 9 Latvian Competition – the Italian architects Paolo Iotti and Marco Pavarani – provides harmonious development of the living, recreational and cultural functions of the site. As a basis for their idea, the architects have used the so-called polygon matrix or the scheme of irregular circular blocks throughout the territory. This system has been also cleverly been used as a basis for the network of streets and pedestrian roads within the project boundaries and it includes the surrounding environment – nature territories (forests, banks of the lake) as well, integrating them into the project. In total, the comfortable environment enclosed by nature and having its identity has been created.

Winner of the second prize – entry of the Spanish architects Miguel Rosique and Esther Escribano – leaves place for further development of the city environment and offers circular living structures melting into the surrounding environment. The Jury has judged it as an innovative and even poetic idea; however, the offer has not completely resolved the connection with the available green area and proximity of the Jugla Lake.

Comments Of The Jury And The Winners:

The Europan 9 Latvian Competition has been evaluated by a competent international Jury consisting of recognized architects, city developers and well-known opinion leaders and personalities from Finland, Germany, Spain, Sweden and Latvia. Latvia in the Jury Commission was represented by Andris Kronbergs (Arhis), Sandra Treija (RTU) and the journalist Jānis Domburs.

Representative of the Competition Jury and the Latvian Union of Architects the architect Sandra Treija evaluates this year works of the Europan 9 Latvian Competition as very diverse and innovative. “The largest surprise was that all members of the international Jury, representing different states, have unanimously voted for the offer of the Architects Bureau Paolo Iotti and Marco Pavarani as the best work of the Competition. This work is simultaneously both original and really implementable,” acknowledges S. Treija.

Representative of the potential territory developer SIA AGN Agris Nagliņš is pleased with the Competition results: “We are happy that the joint work with the Riga City Council City Development Department has been crowned with the prestigious international competition of architects. As a result, an interesting and absolutely viable project has been selected. In contrast to many standard solutions of the city environment formation, this one is very original and retains the main idea – to create the highly qualitative living environment at the territory enclosed by forest at the Jugla Lake.”

“We are expecting support from the Riga City Council also further on, so that the project ideas are not spoiled in the process of their detailed elaboration and could be implemented,” emphasizes A. Nagliņš.

On The Competition Territory

11.5 hectares of the developed territory belong to the city of Riga, 10.82 hectares to the potential developer SIA AGN and about 2.5 hectares to several private persons. In conformity with the City Development Plan for 2006-2018, the territory is to be used for the residential and mixed construction of 3 to 5 floors high.

A large part of this territory is formed of the Jugla fur-farm, which are currently not used and are in a degraded state. A part of the territory is used for the low-rise private housing, car parks and the garage area.

European is organized in Europe every other year, with participation of young architects and landscape designers, whose age as of the moment of closing the Competition does not exceed 40 years, from the entire Europe.

Latvia has now participated in the Europan movement for the third time, in previous years offering for the Competition sites in the historical centre of Riga and Ventspils and at the territories in Ķipsala and at Ķīšezers.

The Competition theme of the Europan 9 is: Sustainable City And The New Social Area, inviting people to evaluate the city’s energy and public activities, on the one hand, and at the same time thinking about the living environment intimacy and individual housing. The Latvian Competition Award Fund is EUR 18,000.

Further information on the Europan 9 Latvian Competition is available on the webpage www.europan.lv and www.europan-europe.com.