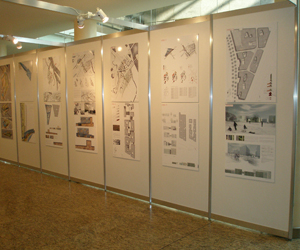 On the 17th of September the winners of the Competition “Town-planning vision sketches of the New Riga Centre in Torņakalns, the Riga City Council and the State Administrative Complex” were announced. Fletcher Priest Architects” (Great Britain), SIA ”Uģis Šēnbergs, arhitekts” (Latvia) and SIA ”MG Arhitekti” (Latvia) “were considered the best among the 17 applicants.

”The main valuables of the British project are urban planning discipline, human scope and understanding of local traditions of a place combined with a flexibility of planning. A high culture of items in those sections of the project that are developed in details shall be noted. That is a lot and the Architecture bureau Fletcher Priest Architects” is high-standard professionals”, says the ”Director of the Riga City Architecture Bureau Jānis Dripe.

Works of all applicants are available on the second floor of Rātsnams within the four weeks.

The applicants should have anticipated on the competition territory arrangement of the New Riga Centre, including: the Riga City Council Administrative Complex, where there is planned to accommodate 2 300 employees, a complex of administrative premises for State institutions (premises to be constructed for Latvian Television, the Ministry of Finance, the State Assay Supervision Inspectorate, the State Treasury, the Ministry of Culture; there is planned an opportunity to accommodate other Ministries and State institutions at the territory), public car parks, a transportation connection point, a new railway station ”Torņakalns”, the retained railway tracks to the Railway History Museum, a prospective network of streets, additional usage to provide a uniform utilisation of the competition territory during the entire day (for instance, a cafe, a hotel, a conference centre, etc.), the residential function for up to 30% of the total floor area of the territory anticipated for the competition, a good and convenient pedestrian connection to the planned Riga Bus Station at Vienības gatve, bicycle sheds at the public facilities, a comfortable public quay of Mārupīte, a public garden or a green area.