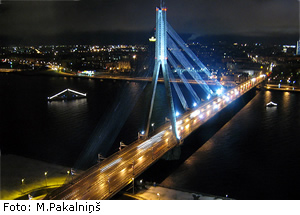 This week polling of car drivers on all the Daugava bridges continues; the aim of this activity is to gain the data for the transport system improvements in Riga and its vicinity.

Polling car drivers on red traffic light brings to the organizers of the questionnaire around 250 – 300 responses per hour, besides, each day there are received around 800 filled post-cards by post. By now there have been received around 20 000 responses and that makes two thirds of the planned amount. “The City Development Department is satisfied with the progress of the questionnaire and is grateful to car drivers for their understanding and kindness in giving responses. Generally respondents understand the importance of the questionnaire and readily take part in it”, says Vice-Director of the Riga City Council City Development Department on City Planning issues Gvido Princis.

During the polling time the drivers are asked about the purpose of their trip, the starting and final points. The responses are necessary for finding out the final destinations of the car drivers that would give a possibility to plan optimization of the network of streets and crossings of the River Daugava, as well as provide a basis for priority traffic improvement activities in accordance with needs of the inhabitants of Riga.

Such polling is widely applied also in other cities of the world, in order to plan investments into the traffic infrastructure, and it has proved its efficiency. The polling is arranged so it does not significantly impact the transport flow on the main city streets. The drivers are questioned at traffic lights and bridges’ exits – places, where traffic stops due to the rules. A response takes 45 seconds.

The polling is organized by the Riga City Council City Development Department in cooperation with the British Company “Faber Maunsell” and the Latvian Company “NK Konsultāciju Birojs”.

The information obtained during the research is confidential and will be used only in a summarized way for the Riga transport model renovation and supplementing. The information updating is required for the needs of elaboration and implementation of the traffic improvement projects. It is planned to use the obtained data also in the process of elaborating the technical project and the financing model of the Riga North Transport Corridor. Provisional results of the research will be known at the end of September and the final ones at the end of December.